Kurt Eisner’s assassination on 21 February 1919 is a forewarning of the conflicts that would prove massively important in shaping political and social events under the Weimar Republic.

At around 10 o’clock on the morning of February 21, before Eisner left the Foreign Ministry for the state parliament in order to tender the government’s resignation, his friends begged him to go via the back entrance of the "Bayerischer Hof" hotel rather than across the street... but Eisner adamantly refused to listen. Minister Unterleitner and I once more reminded him of the climate of hatred whipped up against him by the press and the countless threatening letters he had received over the previous few days. But all to no avail. Eisner insisted on taking his usual route across the street to the state parliament: 'You cannot evade assassination forever, and, after all, they can only shoot me dead once...' We were deep in conversation about how we thought the political situation would unfold when suddenly two shots rang out one after the other behind us. Eisner staggered briefly, and tried to say something but he couldn’t get the words out. Then he silently crumpled to the floor… The moment I heard the shots, I swung round, grabbed the assassin by the arm and threw him to the ground. I had Eisner carried inside the Ministry... The doctor said that the bullets had entered Eisner’s brain from behind his ear at point-blank range and killed him instantly. We subsequently discovered that Count Arco-Valley, the murderer, had hidden in one of the main entrances before the building was closed.

The news of Eisner’s assassination was met with great dismay in Munich. Shortly afterwards, a worker named Linder opened fire in the chamber of the Bavarian state parliament, seriously wounding Minister Auer and killing one deputy and a ministry official. Count Arco, who had links with the right-wing nationalist Thule Society, was admitted to hospital on the same day. Once recovered from his injuries, he was sentenced to death, but had his sentence commuted to lifelong imprisonment by the Bavarian cabinet. He enjoyed extensive privileges in custody, and was even allowed a lengthy stay on a friend’s estate. He was granted a full pardon after five years, was celebrated as a national hero in Bavaria and eventually obtained a management position at Lufthansa’s southern German office. 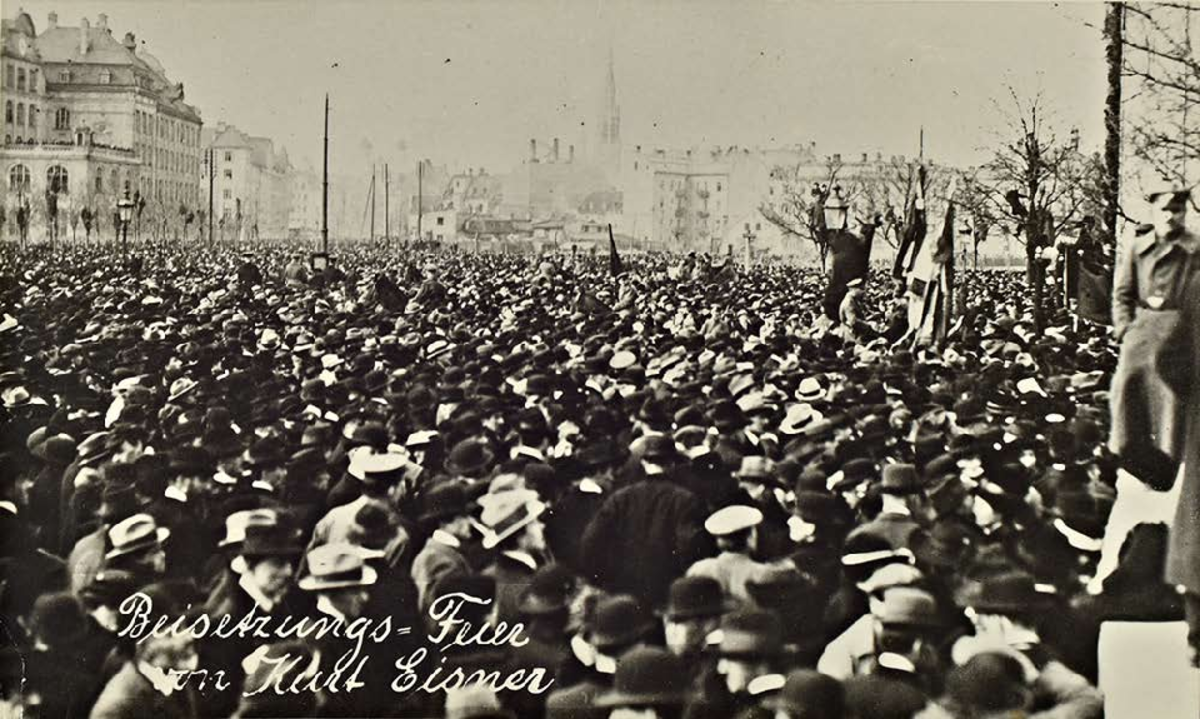 Around 100,000 people attended Kurt Eisner’s funeral, which became the scene for an unprecedented public outpouring of grief. The “Central Council” decreed a day of mourning for the whole of Bavaria. Public buildings flew black and red flags at half-mast, while factories and other workplaces stood empty.

At 9 o’clock, the funeral procession set off from the Theresienwiese for the Ostfriedhof cemetery, accompanied by 20 marching bands. The press described it as follows: 'Bavaria’s capital has seen many stately funeral cortèges throughout its rich history, but, as a mass event, there has been none to rival the procession that brought half of Munich out onto the streets on that late winter’s day of 26 February'.

Eisner, in just over one hundred days of rule, had more ideas, showed more plain common sense, and stimulated more intellectual energy than others had in fifty years. His belief in the power of ideas transforming reality moved even skeptics.

(Heinrich Mann in his memorial address on the occasion of Kurt Eisner’s funeral at the Odeon, Munich’s former concert hall, on March 16, 1919)