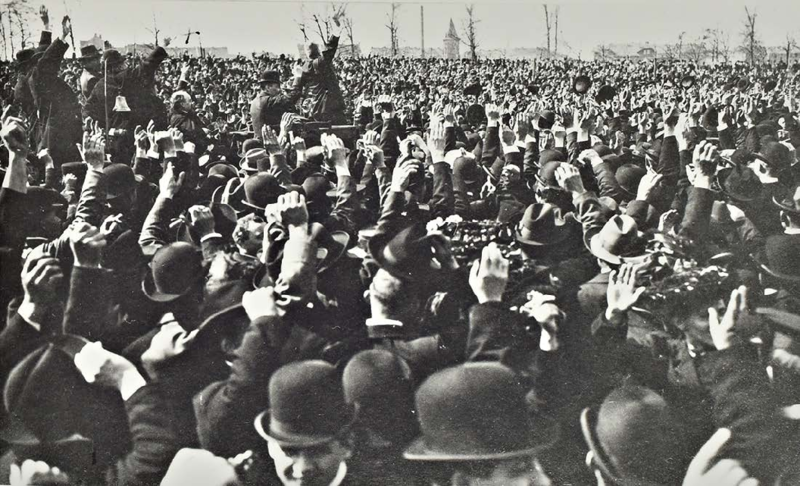 This he pursues alongside his new job as a journalist in Nuremberg for the “Fränkische Tagespost” which he starts in March 1907.

In his speeches and writings, he advocates education for all rather than solely for party officials and recommends that the party’s grass roots are taught effectively the way things are (and the way they should be) rather than inciting them to mechanical agitation based on an academic interpretation of theory. Eisner discovers, in this approach, a means of creating a protest movement “in the proletariat’s struggle to free itself from the shackles of political and economic enslavement”.

He comes to see that the sharpest weapon that social democracy can deploy against reactionary politics is to “revolutionize the minds” of those who possess nothing more than their physical and intellectual labor.

Eisner now stands for election to the Reichstag, but has to withdraw and resign as newspaper editor when his private life is dragged into the political arena.

In mid-1910, a job at “Münchener Post”, an SPD newspaper, allows him to make a fresh start in the new political climate prevailing in the capital of Bavarian reformism. This time his comrades set him up reporting on parliamentary affairs and writing theater reviews.

Then the outbreak of the First World War changes everything for Kurt Eisner.

When war broke out in 1914, Eisner’s friend and employer Adolf Müller, who was a state parliament deputy for the Bavarian Social Democrats and editor-in-chief of the "Münchener Post", the SPD newspaper, took the side of the state and the government. After a brief period in which he joined with supporters of the war, seeing it as a necessary evil in curbing Russian Tsarism, Eisner changed tack and became an outspoken critic. This led Müller to ban him from any involvement in the newspaper’s political section. Up until the January strike of 1918, the only payment Eisner received was for writing freelance theater reviews.

Eisner, writing about Adolf Müller in his 1918 prison diary, said that he had been misled in his initial assessment of the causes of the war “by many years of systematic scheming by an old government socialist”