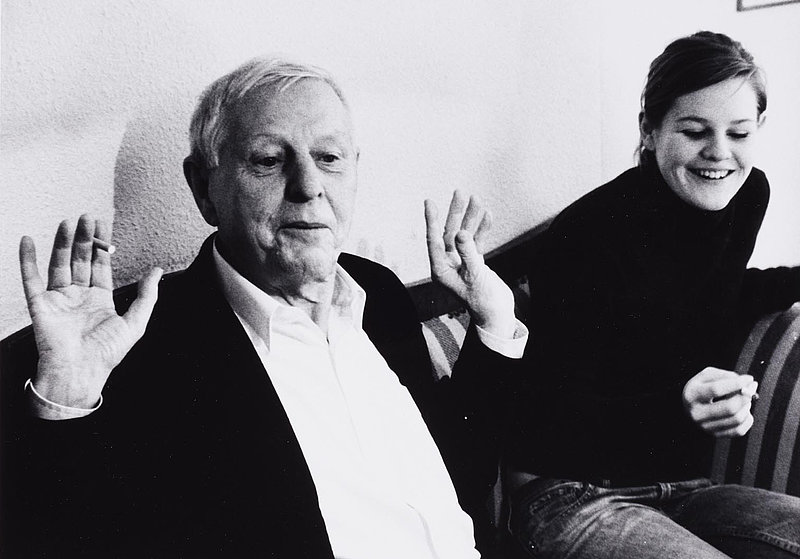 The recently opened Lounge is our new space in the Museum foyer that we hope to use for pop-up events.

Hans Magnus Enzensberger will celebrate his 90th birthday on November 11, 2019.

This exhibition pays homage to two exceptionally productive Munich-based artists whose writings and images inspired cultural life in Germany over many years. The decades-long friendship and collaboration between poet and essayist Hans Magnus Enzensberger and photographer Stefan Moses (1928-2018) has bequeathed a collection of images singular both to the history of portrait photography and the cultural history of Munich. To mark Hans Magnus Enzensberger’s 90th birthday, we will offer the public a unique opportunity to gain insight into the inner workings of this fascinating long-term partnership.

The artists first met in October 1963 in Bad Saulgau, an idyllic little town on the Upper Swabian Baroque Route, the venue for a three-day meeting of “Group 47”. West Germany’s most prominent writers, publishers, critics and journalists had gathered in the Hotel Kleber-Post to hold a series of readings and discuss their latest work. Hans Magnus Enzensberger, at just 33 years of age and the youngest-ever winner of the famous Georg Büchner Prize, made an appearance in Bad Saulgau.

At this time, Stefan Moses, too, had achieved success garnering a reputation as a leading magazine photographer. He was then working for Henri Nannen’s Stern magazine and regarded as one of the most interesting and inquiring members of his profession.

Stefan Moses’ images taken in Bad Saulgau instantly transport the beholder back to a time of political turbulence. The struggle to come to terms with the legacy of Germany’s recent past, albeit three decades after the Nazis first seized power, was still clear for all to see, even in provincial Swabia. Only one year before, West Germany had been rocked to its core by the assault on the fundamental right to freedom of expression in what was later dubbed the SPIEGEL affair. Stefan Moses’ images show the young poet in animated discussion, surrounded by Helmut Heißenbüttel, Ingrid Bachér and publisher Rudolf Augstein.

These photographs, had they been published at the time, would have been read as symbolizing the (re-)affirmation of the right to freedom of thought and the people’s refusal to accept, as a pretext for State intimidation and control, the ”national interest”.

Hans Magnus Enzensberger and Stefan Moses clearly shared an interest in contemporary politics and its impact on German society, even though they expressed this in different ways. Born little more than a year apart, they had many experiences in common. Both had survived Hitler’s “Thousand-Year Reich” largely unscathed and developed a mindset that, coupled with their insatiable curiosity and free thinking, led them to tackle similar issues, albeit from different perspectives. Enzensberger won acclaim for his poetry and his brilliant, provocative and widely read essays on contemporary political issues and the mechanisms of the culture industry, while Stefan Moses’ life’s work focused on the subcultures of German society. August Sander proved a major source of inspiration – shortly after Sander’s book “Deutschenspiegel” (People of the Twentieth Century) was published in 1962, Moses started working on his portrait series, a long-term project addressing themes such as the Germans in the forest. His photographs portrayed contemporary witnesses whose personal fates were often marked by emigration. In other portrait series such as “Politiker hanteln” (Politicians Holding Dumbbells), “Selbst im Spiegel” (Self in Mirror) and “Künstler machen Masken” (Artists Make Masks), Moses trained his camera on West Germany’s political and cultural elite.

From 1984, Stefan Moses regularly attended birthday parties at the Enzensberger family home in the town of Kaufbeuren. While enjoying the occasion as an invited guest, he would also seize the opportunity to commit it to celluloid. His images provide a glimpse of the family’s private life and yet never cross the line of indiscretion – at no point does he ever fail to respect his subjects’ personal integrity and sense of self.

Anyone lucky enough to watch Stefan Moses at work would quickly appreciate his skill and natural charm in engaging his subjects in conversation. He could create an atmosphere that led even the most reserved to drop their guard, freeing their facial expressions and body language of the self-consciousness commonly found in the presence of a photographer.

A book published by Schirmer/Mosel Verlag, featuring contributions from Michael Krüger, Ulrich and Hans Magnus Enzensberger and editor, Ulrich Pohlmann, accompanies the exhibition. We would particularly like to thank Else Bechteler-Moses, Alexander Kluge and Lothar Schirmer for all their support in the production of both the exhibition and the publication.