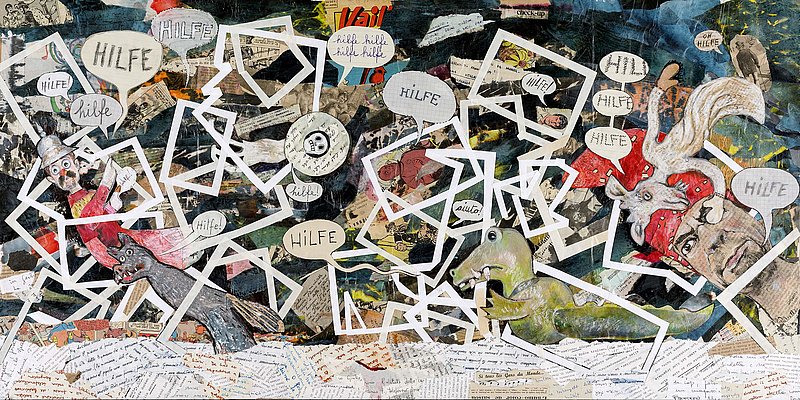 NO LONGER in the Underworld ‒ The Book

Gyula Molnár and Francesca Bettini are two of Europe’s best-known object theater artists. In 2009, they created an exhibition installation for the Münchner Stadtmuseum entitled “Bin im Orkus. Ein Tagebuch aus Matsch” (In the Underworld. A Diary of Mud), to accompany their production of “Kasperls Wurzeln” (Kasperl’s Roots). After the play’s final performance, both puppets and stage were acquired by the Puppet Theater / Fairground Attraction Collection.

Now, Molnár and Bettini have portrayed this crossover from theater to museum in a comic book to be published by Theater der Zeit in October 2019. The book is a contemplation of the transient, ephemeral art of the theater, of what is consigned to oblivion for evermore and of what ultimately remains. This gallery exhibit showcases the colorful collages on which the book is based, together with the stage curtains and puppets from Kasperl’s Roots.
The comic is on sale for €10,00 at the Museum’s ticket office and in the online shop.

Gyula Molnár (b. 1950 in Budapest) is a playwright, actor, director, set designer and cartoonist. He became a well-known name throughout Europe thanks to his classic object theater show “Small Suicides” (1984). In Germany, his numerous workshops and work as a director have had a major influence on the puppet theater scene.

Francesca Bettini (b. 1954 in Venice) works with several European ensembles as an author, director, actor and visual artist.

The story so far

Kasperl’s Roots (2009)
A play by Molnár & Bettini and Kaufmann & Co. About the play: When clearing out his aunt’s apartment after she had passed away, Gyula Molnár discovered a set of “Kasperl” hand puppets wrapped in old newspaper. Covered in mildew, moth-eaten and damaged by woodworm, most of them crumbled to dust in his hands. He was only able to save a precious few, and the Punch-like figure of Kasperl himself was completely missing from the collection. In the play “Kasperl’s Roots”, Molnár descends into the underworld where Kasperl has disappeared in a quest to find his grandmother.
About the stage set: One unusual aspect of the play’s design is that the small puppet theater could revolve through 360° and even spin round and round. There was a different stage set on each side of the small, box-shaped theater. Three of the collage stage curtains are now included in the exhibit: "The Entrance to the Underworld", "The River Lethe" and "In the Depths of the Underworld".

BIn the Underworld. A Diary of Mud
In 2009, artists from Italy, France, Austria and Germany created the exhibition installation “In the Underworld. A Diary of Mud” for the Münchner Stadtmuseum’s Puppet Theater / Fairground Attraction Collection, under the artistic direction of Gyula Molnár and Francesca Bettini.
About the room design: “The room is a workshop where new creatures are born into the world and, with their first steps, set off towards a possible plot. The walls form the pages of a diary that charts the development of a play.”

In the Underworld ‒ The Movie (2011)
Once the exhibition was over, the collection’s curators didn’t have the heart to cold-bloodedly consign the Diary of Mud to the underworld of Munich’s refuse disposal service. Instead, they asked Gyula Molnár and Francesca Bettini to use the installation as a source of materials and scenery for a second, cinematic incarnation of their theatrical ideas.