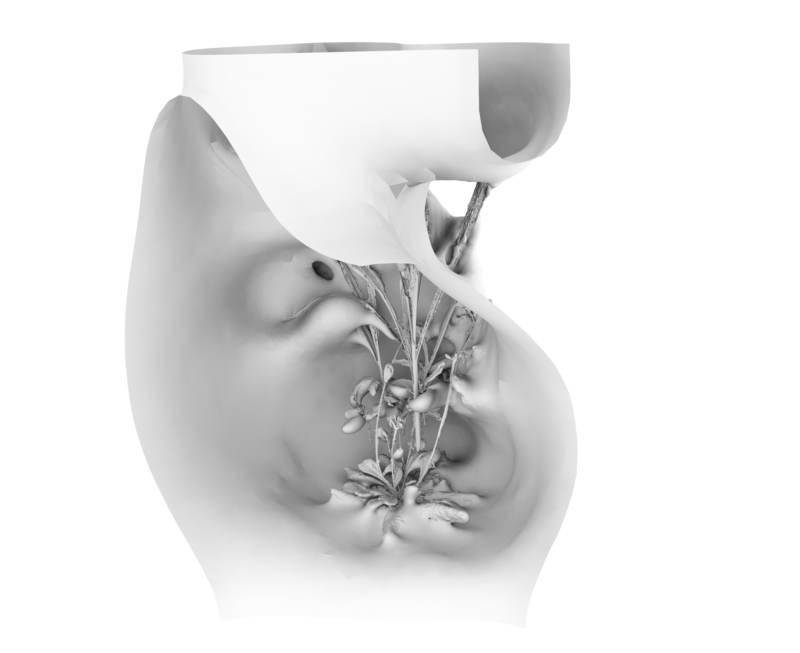 The Münchner Stadtmuseum is delighted to present its first exhibition of work by artist duo Mitra Wakil and Fabian Hesse, who pioneer projects combining modern technology and the visual arts. They mine information from databases to create digital visualizations and then use a 3D printer to transform them into real objects. The exhibition showcases both the finished works – anthropomorphic silver sculptures made from bioplastics – and the color renderings used in creating them.

In recent years, "post-photography" has become the new umbrella term for digital, virtual and hybrid forms of contemporary photography. Recent software developments allow 3D models to be generated from photographic data, thereby transforming the relationship between image and reality. Hesse & Wakil’s art inhabits this space, where photography, software, sculpture and big data converge. Their exhibition invites visitors to immerse themselves in the creative universe of technology- and data-based sculpture.

The "Crop" of the title alludes to crops of plants as well as to the cropping of digital images, simultaneously referencing the exhibition’s subject matter and the technology used to create its exhibits. The artists take 3D scans of plants from agricultural crops such as tobacco and millet, rearrange the data, and use algorithms and digital modeling to produce new, virtual shapes out of the individual elements. This results in an array of fantastical flora reminiscent both of plants and the human body, where leaves, tubers and fruits together produce unexpected hybrid forms. Hesse and Wakil use 3D printing to transform this abstract data into physical objects. Crop offers a prime example of the capacity of databases to provide artists with a rich seam of material.

The duo, in their latest project for Forum 052, draw on the biotech databases used to investigate plant growth behavior under different climatic conditions. One conclusion some people draw from the current environmental crisis is that biotechnology should serve to modify agricultural crops to allow them to cope with changing conditions. Yet, Hesse and Wakil’s hybrid sculptures highlight a very serious problem intrinsic to this technology. However useful big data and genetic engineering may be for combatting our climate emergency, their infinite permutations harbor countless risks, since it is impossible to foresee their full effects on the natural world. Hesse and Wakil’s work calls into question humanity’s ability to alter and improve on nature. It also explores the creative potential of data- and technology-based flora. The resulting 3D objects defy categorization as either simply natural or artificial.

The exhibition also displays the models used to design the twin sculptures featured in "Westpark Clouds" (2017). For this commission, residents of Munich’s Westpark district were offered the opportunity to participate in the creation of a community sculpture. This involved 3D scans being taken of the participants in poses that they chose for themselves. They all received a small 3D print portrait in the form of a bust in return. The artists subsequently used some of the data to create a life-sized aluminum sculpture of two groups of people. They melded together individual portraits in a collage through a modeling process involving superimposition, resizing and distortion to create a fusion of the realistic with the abstract.

For the opening event on October 22, the artists and curators will be present in the exhibition between 2 pm and 6 pm.